Testing for Increased Thirst and Urination

What are the causes of increased thirst and urination? 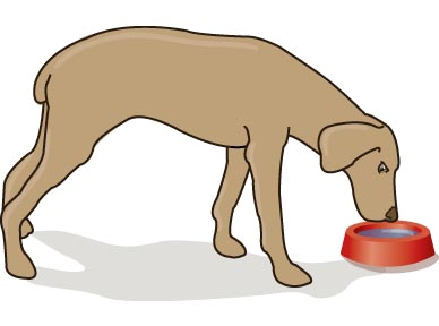 Increased thirst and urination are associated with a variety of diseases. The following list includes some of the more common disorders:

This list is huge! How can we possibly determine the cause in my pet?

The search for answers begins with a complete history and physical examination. A pet’s “history” is the information you give the veterinarian about your pet’s illness. History is very important and can provide important clues about the cause of increased thirst and urination. For example, a female pet with a history of being in heat six months ago may have increased thirst and urination because of an infected uterus; an elderly cat that is also vomiting might have hyperthyroid disease; a pet that is eating well but losing weight may have diabetes mellitus (sugar diabetes).

"...you should tell your veterinarian about any medication or supplements your pet is receiving…"

Some drugs can cause increased thirst and urination and you should tell your veterinarian about any medication or supplements your pet is receiving such as anti-seizure drugs (“anticonvulsants”), corticosteroids, and diuretics (“water pills”). It would also help if you measured exactly how much water your pet is drinking in a 24 hour period; this will help your veterinarian determine the severity of the problem.

Physical examination involves looking at all parts of the body, and typically includes listening to the heart and lungs with a stethoscope and “palpating” the abdomen (gently squeezing or prodding the abdomen with the fingertips to detect abnormalities of the internal organs). Physical examination may provide clues about the cause of increased thirst and urination. For example, a cat with small rough kidneys may have serious kidney disease; a dog with a sagging abdomen and hair loss might have Cushing’s disease; a dog with enlarged lymph nodes may have a cancer called lymphoma.

History and physical examination are important first steps, but further testing will likely be required and your veterinarian may recommend screening tests. These are simple tests that provide information about the overall health of your pet and often provide clues about the underlying problem.

What screening tests are recommended?

The most common screening tests are a complete blood count (CBC), a serum biochemistry profile, and a urinalysis. 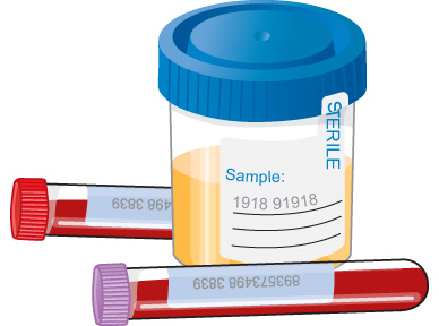 What can these screening tests tell us?

In addition to providing information regarding the possible cause of your pet's symptoms, these screening tests may uncover other conditions that need to be addressed or treated.

(a) The CBC (complete blood count) provides information about the three different cell types in the blood. These are: red blood cells, which carry oxygen to the tissues, white blood cells, which fight infection and respond to inflammation, and platelets, which help the blood to clot. The CBC provides details about the number, size, and shape of the various cell types, and identifies the presence of abnormal cells. (See article Complete Blood Count).

In a pet with increased thirst and urination the CBC may show changes such as:

(b) Serum biochemistry refers to the chemical analysis of serum, which is the pale yellow liquid part of the blood that remains after the cells and clotting factors have been removed. Serum contains many substances including enzymes, proteins, lipids (fats), glucose (sugar), hormones, electrolytes, and metabolic waste products. Testing for these substances provides information about the health of various organs and tissues in the body, as well as the metabolic state of the animal. (See article Serum Biochemistry)

In a pet with increased thirst and urination the serum biochemistry panel could show some of the following changes:

(c) Urinalysis is a simple test that analyses the physical and chemical composition of urine. It measures how well the kidneys are working, identifies inflammation and infection in the urinary system, and helps to detect diabetes and other metabolic disturbances. Urinalysis is important for the proper interpretation of the serum biochemistry profile and should be done at the same time as blood testing. (See article Urinalysis).

In a pet with increased thirst and urination some of the changes seen on urinalysis may include:

"A variety of additional tests might be recommended depending on the results of history, physical exam, and screening tests."

A variety of additional tests might be recommended depending on the results of history, physical exam, and screening tests. Some examples include:

What if the cause of increased thirst and urination is not found?

"...testing for a disease call diabetes insipidus should be considered."

If the screening tests are all normal and the pet continues to pass dilute urine, then testing for a disease call diabetes insipidus should be considered.

What is Diabetes Insipidus?

"Diabetes insipidus is a hormonal disorder in which the kidneys do not concentrate urine as they should."

Diabetes insipidus is a hormonal disorder in which the kidneys do not concentrate urine as they should. Diabetes insipidus is completely different than diabetes mellitus (the term 'mellitus' refers to the sweetness of the urine in sugar diabetes, while the term 'insipidus' refers to the watery nature of the urine in diabetes insipidus.) The hormone involved is called antidiuretic hormone (ADH). This hormone is released from an area within the brain and acts on the kidney to control how much water goes out in the urine. When the body needs water, ADH levels rise and the kidney holds water back and keeps it from going out in the urine. When there is excess water in the body, ADH levels fall and the kidney allows excess water to flow into the urine.

There are two main forms of the disease:

What is the test for Diabetes Insipidus?

There are several tests to diagnose diabetes insipidus. Three common ones are:

How are the results of these tests interpreted?

In general, the tests can be interpreted as follows:

It is important to note that there can be quite a bit of variability with the plasma osmolality test. It is best used as a screening test, rather than the definitive test for diabetes insipidus.

© Copyright 2017 LifeLearn Inc. Used and/or modified with permission under license.