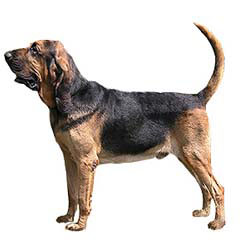 The noble, dignified Bloodhound can trace his lineage back to seventh-century France. That was when Hubert, a monk, began to breed these dogs (which are called St. Hubert hounds even today in French-speaking Europe). Later, hounds brought from the Holy Land to Europe during the Crusades or bred by medieval noblemen were added to the mix to produce the Bloodhound we know today. Although many of today's Bloodhounds are used to track fugitives or missing persons, Bloodhounds were not employed for either purpose until the 16th century. Today, many Bloodhounds find useful employment in search and rescue work, and a trail performed by a Bloodhound is admissible evidence in many courts of law. The breed ranked 45th in registrations among the 150 breeds registered by the American Kennel Club in 2006.

Bloodhounds are gentle and loving, especially with their people, but they are not exactly paragons of grace and deportment. Bloodhound puppies and young adults have lots of energy, which they happily expend running around the house, bumping into things, and generally creating mayhem. In addition, the Bloodhound is a prolific drooler who thinks nothing of shaking his head and flinging goobers everywhere. These dogs also adore finding stinky things and then rolling in them. The wise owner removes any objects of value from the Bloodhound's purview, and resigns himself to having a house that might make an interior decorator recoil in horror. They know that the companionship of this noble dog is well worth having less-than-perfect surroundings.

Bloodhounds are gentle giants with large jowls, pendulous drop ears and mournful eyes. Males are generally larger than females. Either way, a Bloodhound doesn't reach adult height and weight until he or she is two to three years old. Coats come in one of three color combinations: black and tan, red and tan, and red. Devotees note that the dog's tail is approximately the same height as an average coffee table. The savvy owner makes sure that those coffee tables do not hold objects that could be broken by a Bloodhound's wagging tail.

The occasionally stubborn, often scent-obsessed Bloodhound needs a firm but patient trainer. Experienced Bloodhound owners make sure that their homes have very secure fences, and never allow their dogs to run off-leash unless they're in a fenced area. The dog's passion for interesting scents limits his interest in certain canine sports such as rally and competitive obedience. However, the Bloodhound excels in tracking. Achievement-oriented Bloodhound owners should train their dogs in tracking with an eye toward earning the tracking titles offered by the American Kennel Club. Another pursuit in which Bloodhounds excel is search and rescue.

A weekly brushing and pedicure, coupled with bi-weekly ear cleanings, will help the Bloodhound to look and feel his best.

Like many large, deep-chested dogs, Bloodhounds are susceptible to bloat, a condition in which the dog's stomach fills with air and may twist. This condition is fatal if it is not treated quickly. These dogs also are prone to elbow and hip dysplasia, and problems with their eyelashes irritating their eyes. Breeding parents should receive OFA screenings for dysplasia and CERF screenings for possible eye problems.

Barnaby and Burgho, used to trail Jack the Ripper; Grafton and Countess, subjects of famous paintings by Sir Edwin Landseer.

© Copyright 2014 LifeLearn Inc. Used and/or modified with permission under license.